Dirk Gently's Holistic Detective Agency: A Spoon Too Short, Issue #4 and Issue #5 came in the mail today, and I couldn't be happier.  My local comic book store sold out on Issue #4 before I could purchase it, so I just waited until #5 came out and ordered both online.  Thrilling stuff, I'm sure.  From what I've read, the series hasn't been overwhelmingly positive, selling a few thousand copies per issue, but I think that's because where A = weekly comic readers and B = Douglas Adams fanatics, A∪B is huge, while A∩B has yet to see growth to its full potential.  Fear not, members of A∩B∩C, where C = math nerds, for the paperback is sure to outsell the comics.  You can pre-order it right here, on Amazon.com.

Issue #4 begins with another flashback to Dirk Gently's youth, when as a college student, he plays on the superstitious nature of college students.  Like the mean, nasty general the of course appears at the end of the flashback, the college students think Dirk is psychic.  Back in Africa, Dirk has somehow acquired aphrodisiacs, namely oysters and lobster, in the middle of the Bush.  How he intends to use them is something only Dirk could come up with.  Issue #5 has Dirk interrogating the aliens.  Why?  Because aliens.  And the noses of rhinoceres.  And the dimensions therein.  It's all quite silly and fun, with Issue #5 ending in a 10-page coda about the London Zoo, where Dirk Gently is on a date. 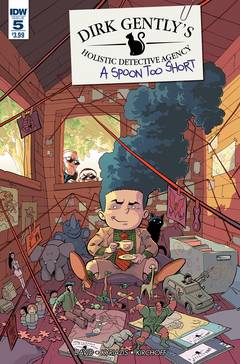 I've had a lot of fun reading these adventures, and I look forward to reading more Dirk Gently in October, when a new series starts.  I've been quite taken with all the aspects of this comics, from Arvind Ethan David's writing to the fantastic Africascapes of Ilias Kyriazis and Charlie Kirchoff.  I'm not much of a TV watcher, but the new Dirk Gently TV show, also coming out in October, might get a view from me.