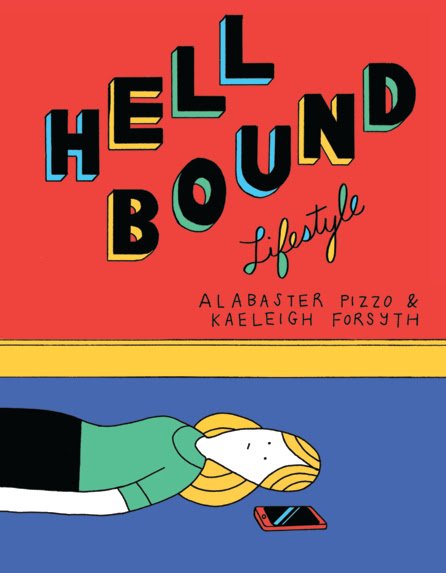 Hellbound Lifestyle is a 76-page recording of the thoughts of Kaeleigh Forsyth, which she puts on notes on her phone.  The art, coloring, and lettering is by her friend, Alabaster Pizzo.  Forsyth ruminates on trying to build an Instagram following, growing older, dating, and generally being... how shall I put this?  Different?  Unique?  Meta-sane?  There are clear earmarks of mental illness, the type many people see.  I like how things go wrong in her life, but she doesn't go out of her way to fix them, the way "normal" people are supposed to.  Maybe Kaeleigh isn't so different after all.

The artwork is just as clever as the writing, using consistent coloring to create a homogeneous look throughout the volume.  In fact, I wouldn't be surprised if only 10 to 15 different colors are used, if not fewer.  The lettering is done in lower- and upper-case letters; it's clear and easy to read, but not so perfectly even that it's annoying, looking like it was typset or something.

Overall, I really liked the book.  I laughed out loud several times (which means I breathed through my nose slightly stronger than usual these days because who really laughs anymore? (shit, that sounds pathetic)).  In the digital world, there are the haves and the have-nots.  Kaeleigh deals with having no internet at home and half a doorknob on her bedroom door, but still wants to have hundreds of likes on Instagram, which doesn't happen.  The title mostly speaks of failure, in general, but it succeeds in doing so in a positive manner.  Freud said that when a woman tells a joke about another woman, there has to be some reflection upon the first woman for it to be funny, and I think they've achieved this.